According to a military report reaching Camp Aguinaldo, the clash occurred when personnel from the 2nd Scout Ranger Battalion (2ndSRB) and 8th Infantry Battalion (8IB) responded to a tip from a resident about the presence of five alleged members of the NPA’s Headquarters Force Neo, North Central Mindanao Regional Committee (HQF Neo, NCMRC) in the hinterlands of Sitio Lamana, Barangay Kibalabag, Malaybalay City last Saturday.

Lt. Col. Anthony Bacus, commander of the 8th Infantry Battalion (8IB), alleged that the rebels were extorting money and food supplies from vegetable farmers in the village.

A brief gun battle occurred when the responding troops chanced upon the armed men who fired the first shot.

After the firefight, the troops recovered the bodies of alias “Draw,” an alleged member of the dismantled Squad 1, Platoon Dario, Sub-Regional Committee 2 of the NCRMC; and alias “Paet,” an alleged Communication Staff/Special Operations Group/Intel of Regional Operations Command, NCMRC.

Pursuit operations were ongoing to arrest the fifth rebel who managed to escape from the troops.

The troops also rescued seven civilians, four of them minors, who were “threatened and extorted” by the suspects.

“We rescued the civilians who were threatened and extorted by the NPA terrorists. They were approached at their farm and the CNTs [communist-terrorist group] extorted vegetables from them and when they saw the soldiers approaching, they immediately fired,” Bavus said in a local dialect.

“We are waiting for the family members of the dead CNTs in order for them to finally rest in peace. We are saddened by their demise, and it is because of the deception of the NPA terrorists,” he added.

Seized from the suspects were three caliber 45 pistols, one 9mm pistol, five magazines, one cellphone, and assorted medical supplies.

Bacus appealed to the remaining communist rebels in the area to surrender to the government and avail of social development benefits under the Enhanced Comprehensive Local Integration Program (E-CLIP) of the government.

The distribution of financial aid spearheaded by the Department of Social Welfare and Development (DSWD) Regional Office 10 was held at the Headquarters of the 88th Infantry “Maringal” Battalion at Purok 10, Brgy. South Poblacion, Maramag, Bukidnon.

All of them were also given Family Relief Food Packs from DSWD 10.

MALAYBALAY CITY (31 October 2021) – ‘Ka Oris”, a top leader of the communist New People’s Army (NPA) who has PhP 7.8 million bounties was killed in a clash with Army troops in Sitio Gabunan, Brgy. Dumalaguing, Impasugong, Bukidnon on October 30. the military says.

Major General Romeo S. Brawner Jr, commander of the Army’s 4th Infantry Division, confirmed the information to the media in a press conference held at the Function Hall inside Camp Osito D. Bahian in the city on October 31.

He said Jorge Madlos alias Ka Oris, was among two casualties in a 30-minute encounter between soldiers and the NPA guerrillas in an inhabited and mountainous area in Impasug-ong town.

Maj. Gen. Brawner identified the other casualty as Eighfel Dela Pena alias Pika/Maui, communications and medical staff of Ka Oris. He said both died due to gunshot wounds.

He said the 403rd Infantry Brigade of the 4ID launched combined combat operations at around 12:30 a.m. on October 30 in response to the information from the community about the presence of the armed group.

He said the joint army units were composed of the 8th Infantry Battalion, the 1st Special Forces Battalion, 88IB, a Scout Ranger company, and the Philippine Air force based in Cagayan de Oro City.

The 4ID commander described Ka Oris as a longtime spokesperson of the National Democratic Front (NDF) in Mindanao and commander and spokesperson of the National Operational Command of the NPA nationwide. He said Ka Oris was also a member of the communist Central Committee – EXECOM-Politburo and husband of Myrna Sularte alias Maria Malaya, the secretary of North Eastern Mindanao Regional Committee (NEMRC).

He said they requested close air support and dropped six bombs in the positions of Ka Oris and his group.

Brig. Gen. Barandon said they recovered an M14 rifle, a KG9 rifle, and ammunition of different caliber, other material, and assorted personal belongings.

On October 31, the National Democratic Front’s (NDF-NEMR) confirmed Madlos was killed by the military but claimed he and his medic were ambushed while onboard a motorcycle Friday night while heading towards the national highway from the Poblacion of Impasug-ong. The statement was signed by Ka Maria Malaya, NDF-NEMR spokesperson and wife of Ka Oris.

In a Mindanews report, Brawner reacted to the NDF’s statement.

“It is not the AFP’s tactics to ambush unarmed combatants especially if they are onboard a motorcycle. Also, on the allegation that there was no actual encounter, the people in the communities around can attest that they heard the sound of gunfire and the sound of airplanes and helicopters on October 30, 2021,” Major Gen. Brawner said. 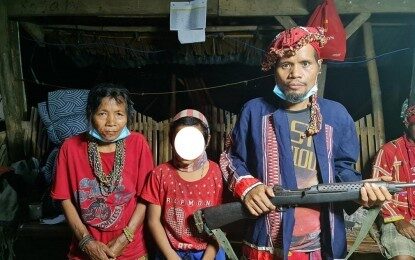 The report was released by the Army on Tuesday afternoon (October 5) identified the surrenderers as Man Oloron, 56, an NPA “political guide,” and his wife Nili Salobo, 55, together with their 11-year-old son.

The 88IB’s Alfa Company confiscated from them one carbine rifle, with one magazine, and nine live ammunition in Sitio Malantao, Barangay Halapitan, San Fernando, Bukidnon, during their surrender.

Their surrender was the result of the unit’s continued campaign against communist armed groups in the mountainous areas of Pantaron Mountain Ranges, covering Malaybalay City, San Fernando, and Cabanglasan towns in Bukidnon.

Oloron said they joined the NPA after the communist group promised them a better life.
The couple’s son was turned over to the Municipal Social Welfare and Development Office of San Fernando, Bukidnon to undergo an interview and stress debriefing.

“The comprehensive conduct of Community Support Program (CSP) and the focused military operation of government troops have been instrumental in the rapid disintegration of the NPA formation. This is a clear indicator that we are near to ending this 52-year of local communist armed conflict,” he said.

The 88IB has already coordinated with the police as it plans to file an IHL violation case against the NPA for recruiting minors.

“I am also calling the attention of all the parents, let us monitor our children from being recruited by the NPAs,” Vingno said.

The 88IB in its Facebook post said the minors were identified as Alias Anika, 16, Alias Jasmin, 17, and Alias Saylyn, 16.

Alias Anika and Alias Jasmin are residents of Sitio Kasilaan, Brgy. Nala, while Alias Saylyn is from Sitio Alimpulos, Brgy. Cawayan – all from San Fernando, Bukidnon.

Alias Saylyn in vernacular said she was recruited when she was still 15 years old because of his father, who was also a fulltime NPA member. She said she experienced hardships and hunger with them (NPA).

“I thought my life would be better off joining the group, but my life was getting worse. We keep on walking in the mountains even without food just to keep away from the soldiers,” Alias Saylyn said.

LT. Col. Franklin F. Fabic, commanding officer of 88IB, welcomed the surrenderees who turned their backs from the CPP-NPA.

“To all the parents, please take good care and monitor the activities of your children. To all the youth, don’t be a victim of these wrong communist ideology; it will waste your life. We will help these minors to file a case against the perpetrators in court specifically on the recruitment of children under the age of 18 years old into an armed force or group other than the national armed forces under Sec 4c (24ii) of RA 9851 (Philippine Act on Crimes Against International Humanitarian Law (IHL), Genocide and other Crimes Against Humanity) and other violation of laws.” LTC. Fabic said.

IMPASUG-ONG, Bukidnon (Jan. 28/PIA) — Military and police authorities have urged businesses in Bukidnon province to report immediately any extortion schemes set up by the New People’s Army (NPA), the armed wing of the Communist Party of the Philippines (CPP).

In a meeting in Malaybalay City on Jan. 21 with business owners under the Bukidnon Lateral Organized for Development (BukLOD), the Army’s 8th Infantry Battalion (8IB) and the Philippine National Police (PNP) jointly presented a diagram on what to do if they receive a threat or demand for “revolutionary tax” from the NPA.

The diagram serves as a guide on preventing extortion and the best ways to respond to it. It illustrates the process of reporting and all other approaches in dealing with the extortionists.

The NPAs demand money from businesses through force or threat to finance their terroristic activities. They (NPA) called this “Revolutionary Tax.”

Lt. Col. Ronald Illana, 8IB commanding officer, said the NPA’s extortion activities have been the main problem of the government contractors as it delayed the completion of infrastructure projects in the province.

“We are urging everybody to help us stop the finance of the NPA by reporting and preserving all calls, text messages, and CCTV’s images because we need them to identify the suspects, report it to the nearest Army and PNP offices,” Illana said.
BukLOD president Doy Lopez, likewise, has called on the 21 members of his business group requesting them to display a tarpaulin on their establishments showing the “extortion guide,” including the police and military hotlines to stir awareness among its employees and the public.

BukLOD is a group of business companies organized since 2015 to help the province in realizing its vision for a stable and comfortable life.

“Being the president of this organization, I am encouraging everybody to help our Army and PNP. Do not be afraid to report and cooperate with them. It’s not only the NPAs who are doing extortion but there are other criminal groups and individuals also,” Lopez said. (8IB, PA/PIA)