IMPASUGONG, Bukidnon (07 November 2021/PNA) – Justice has been served after the death of Jorge “Ka Oris” Madlos, commander and spokesperson of the National Operations Command (NOC) of the New People’s Army (NPA), in the hinterlands of Sitio Gabunan, Impasugong, Bukidnon on Oct. 30.

This, according to Datu Renato Sumbongan, the Indigenous Peoples Mandatory Representative (IPMR) of Malaybalay City, Bukidnon, in a news release of the Army’s 8th Infantry Battalion (8IB) on Sunday, November 7.

For decades, the 74-year-old Madlos led terroristic activities, especially in Mindanao, and was recorded as the most wanted NPA commander in the country.

“Now, they already achieved it,” he said as he called on the remaining communist terrorist groups to return to the fold of the law.

“We will be relentless in our operation in order for us to attain long-lasting peace and development. It will be better for you to benefit from the Enhanced Comprehensive Local Integration Program for your new life with your family,” Talaroc added, referring to the program that grants financial assistance to former rebels.

Madlos, also a member of the Communist Party of the Philippines (CPP) Central Committee and spokesperson of the National Democratic Front (NDF)–Mindanao, was killed with a rebel medic and communications officer Eighfel Dela Peña alias Pika/Maui in an encounter with the combined troops of the 8IB, 1st Special Forces Battalion, and 88th IB under the 403rd Infantry Brigade.

The communist leader tested positive for Covid-19 two days after his death and was cremated before he was turned over to Impasugong officials.

Peace advocate Joy “Ka Amihan” Saguino, a former rebel leader, condoled with the family of Madlos but said the fight for social justice that insurgents claim is nothing but a fragment of propaganda.

“I have also been in the same situation where my comrades fell in the battlegrounds, believing that violence is the only solution to the society’s turmoil. I have also witnessed the cruelty of the group I once served towards people who are not receptive to the communist agenda and those labeled as “traitors and enemies” of the revolution,” she said in a statement on Oct. 31.

“Memories of violence are still vivid every time I reflect on what I had gone through for 11 years,” she added.

She has likewise been charged with multiple murder raps.

The Anti-Terrorism Council also formally designated the NDF as a terrorist organization on June 23, 2021, citing it as “an integral and separate part” of the CPP-NPA that was created in April 1973.

MALAYBALAY CITY (31 October 2021) – ‘Ka Oris”, a top leader of the communist New People’s Army (NPA) who has PhP 7.8 million bounties was killed in a clash with Army troops in Sitio Gabunan, Brgy. Dumalaguing, Impasugong, Bukidnon on October 30. the military says.

Major General Romeo S. Brawner Jr, commander of the Army’s 4th Infantry Division, confirmed the information to the media in a press conference held at the Function Hall inside Camp Osito D. Bahian in the city on October 31.

He said Jorge Madlos alias Ka Oris, was among two casualties in a 30-minute encounter between soldiers and the NPA guerrillas in an inhabited and mountainous area in Impasug-ong town.

Maj. Gen. Brawner identified the other casualty as Eighfel Dela Pena alias Pika/Maui, communications and medical staff of Ka Oris. He said both died due to gunshot wounds.

He said the 403rd Infantry Brigade of the 4ID launched combined combat operations at around 12:30 a.m. on October 30 in response to the information from the community about the presence of the armed group.

He said the joint army units were composed of the 8th Infantry Battalion, the 1st Special Forces Battalion, 88IB, a Scout Ranger company, and the Philippine Air force based in Cagayan de Oro City.

The 4ID commander described Ka Oris as a longtime spokesperson of the National Democratic Front (NDF) in Mindanao and commander and spokesperson of the National Operational Command of the NPA nationwide. He said Ka Oris was also a member of the communist Central Committee – EXECOM-Politburo and husband of Myrna Sularte alias Maria Malaya, the secretary of North Eastern Mindanao Regional Committee (NEMRC).

He said they requested close air support and dropped six bombs in the positions of Ka Oris and his group.

Brig. Gen. Barandon said they recovered an M14 rifle, a KG9 rifle, and ammunition of different caliber, other material, and assorted personal belongings.

On October 31, the National Democratic Front’s (NDF-NEMR) confirmed Madlos was killed by the military but claimed he and his medic were ambushed while onboard a motorcycle Friday night while heading towards the national highway from the Poblacion of Impasug-ong. The statement was signed by Ka Maria Malaya, NDF-NEMR spokesperson and wife of Ka Oris.

In a Mindanews report, Brawner reacted to the NDF’s statement.

“It is not the AFP’s tactics to ambush unarmed combatants especially if they are onboard a motorcycle. Also, on the allegation that there was no actual encounter, the people in the communities around can attest that they heard the sound of gunfire and the sound of airplanes and helicopters on October 30, 2021,” Major Gen. Brawner said. 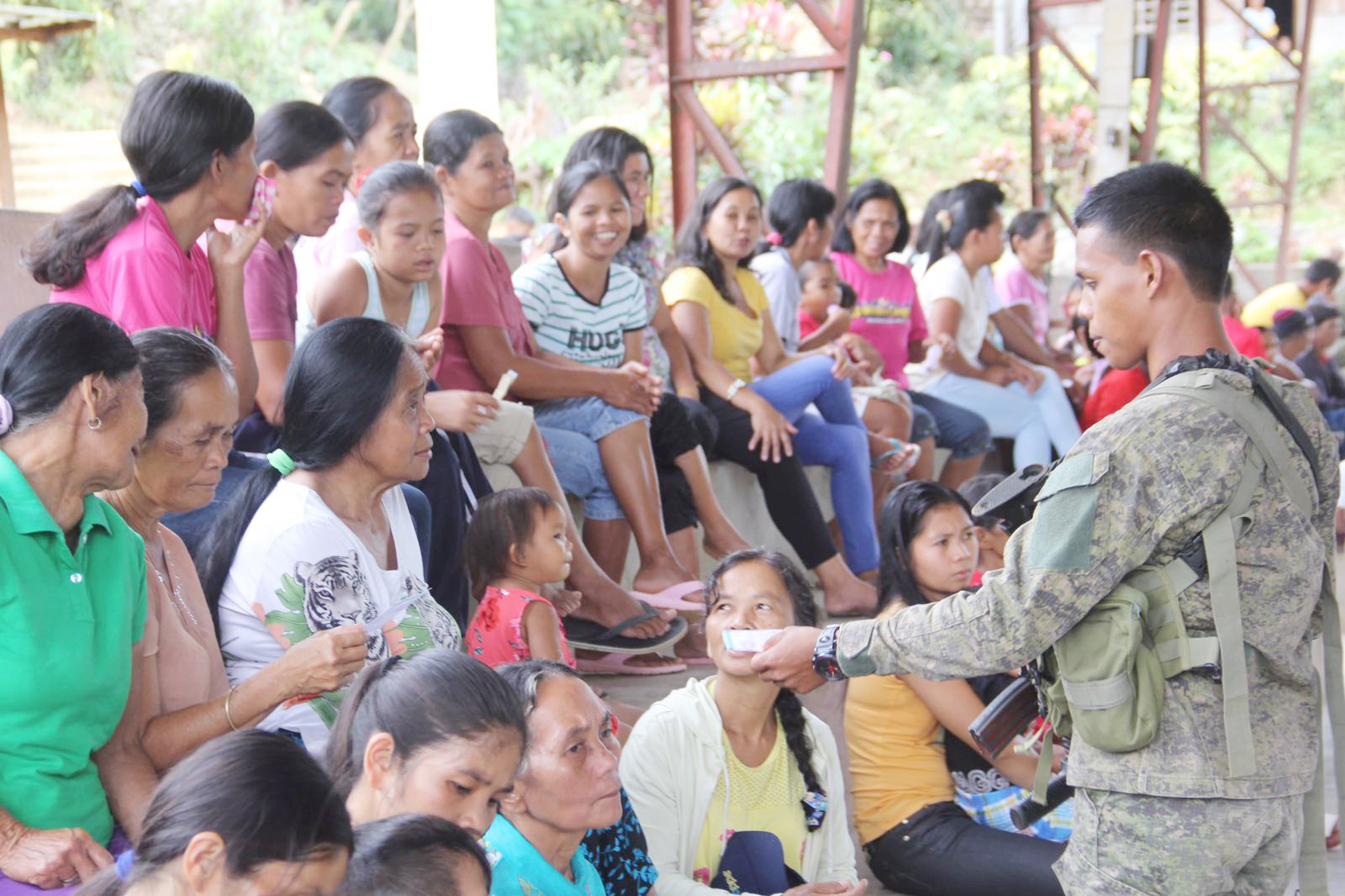 Jamby said the way they were treated by soldiers was contrary to what they were told by their senior cadre that they would be raped or tortured once they surrender.

Resylyn, 28 years old was joined by her husband, Renante Tumbalang alias Jigger or War, 37 years old, the commander or “CO” of GF6’s Front Operational Command who said they have lost the sympathy of the local populace and the tribes, which significantly affected their morale.

The couple revealed that the loss of mass base constricted them in the mountains. They cannot “disperse” their forces anymore, which made them weak and vulnerable to be tracked down due to the government troops’ non-stop offensive operations in their mountain lairs.

“The death of Commander Amana in one of the major encounters with the Army was very demoralizing,” Jigger said.

Following the creation of Region 10 Task Force to End Local Communist Armed Conflict that was launched in Bukidnon in July 2019, local government units (LGUs) in Region 10 were tapped to initiate “Localized Peace Engagement.” Elected officials were seeking to intervene and encourage NPA members who are also their constituents to take the path to peace and participate in governance as resource persons for the socio-economic programs of the LGUs.

Valencia City LGU was key to alias Jamby and alias Jigger’s return to the fold of the law.

The LGU’s efforts paved the way when the couple sought the assistance of barangay Banlag Kagawad Saliezer Dejos and Valencia City Mayor Azucena Huervas as the former rebels expressed their desire to quit from the communist movement.

Assisted by Bukidnon 4th District Representative Rogelio Neil Roque, Valencia LGU immediately arranged for the safe surrender of the couple and five others in an undisclosed place late last year.

They were eventually turned over to 88th Infantry Battalion (88IB) and 403rd Infantry Brigade for enrolment in Enhanced Comprehensive Local Integration Program (E-CLIP) of the government.

Major General Franco Nemesio Gacal, 4th Infantry Division Commander said “Our war is not focused on winning battles through the barrel of guns. Ours is a peaceful war involving communities in conflict-affected areas. Our constituents and we, together with local leaders, join hands and commit to battle land issues, poverty, and other problems through dialogue with the right people, organization, and agency. We commend the 403rd Bde and the 88IB, and the local government unit of Bukidnon for winning the peaceful war.”

Jamby and Jigger along with their five other colleagues were presented by Valencia City LGU to Gov. Jose Ma. Zubiri Jr., as Provincial Chairman of the E-CLIP committee.