“There are 4,000 doses of [CoronaVac] sinovac vaccines that arrived today. These vaccines are part of the purchased vaccines made by the government for the vaccination rollout. The order for these vaccines is for Cagayan de Oro City and Bukidnon, but we also give these to other [places],” said Dr. David Mendoza, Local Health Support Division chief of the Department of Health (DOH)-10.

Meanwhile, Mendoza said that the COVID-19 is increasing, and the positive cases of the region had exceeded the 20,000 mark. He also stated that last May 30, an additional 300 plus positive cases were recorded, and the case fatality rate remains at 3.2 percent.

In comparison, Mendoza said that the previous months’ active cases were only between 900-1000. As of May 30, the active cases in the region reached 4,000.

The increase in COVID-19 cases also affected the recovery rate of the region, which went down from 90 percent to 74 percent.

DOH also urges the senior citizen to avail of the free vaccines in their respective municipalities/cities.

CAGAYAN DE ORO CITY (MindaNews / 11 May) – Just because you are already fully vaccinated doesn’t mean you can go back to your normal life as it was before the coronavirus disease (COVID-19) pandemic, as 50 of them in this city have found out.

Dr. Joselito Retuya, the chief epidemiologist of the City Health Office, said in a virtual press conference on May 11 that 50 of those who have already received their second dose of Sinovac’s CoronaVac vaccine were still infected.

He said there were 31 others who got infected after receiving their first dose of the Sinovac, and 26 of those who got their first jab of the AstraZeneca vaccine.

Retuya said there were also a case for each of returning overseas Filipino workers who got infected despite getting the Sinopharm and Pfizer vaccines. But he did not mention if the two OFWs were already fully vaccinated.

“The vaccines we have are not perfect. Some vaccinated people still end up catching the virus,” Retuya said.

He said that the primary purpose of the vaccine is to prevent a person from getting really sick.

He noted that of those infected after being vaccinated, only two have shown moderate symptoms, the rest were either asymptomatic or only had mild symptoms.

Despite the risk of still getting infected despite vaccination, the doctor advised Kagay-anons to “take whatever vaccine is available because it will protect you from death 100 percent.”

Cagayan de Oro started administering vaccines to its frontline health workers in March, and to senior citizens towards the end of April.

A shipment of 74,000 doses of AstraZeneca vaccine for Northern Mindanao arrived via the Laguindingan Airport last week, according to the Department of Health regional office.

Mayor Oscar Moreno asked the people’s cooperation in helping contain the spread of the virus. “If the people get reckless, become complacent, then they get infected, and infect their loved ones as well,” he pointed out.

Retuya advised Kagay-anons to refrain from holding parties these days, suggesting sending virtual greetings instead. “Of course we remove our mask when we eat, and we’re all closely huddled together. There’s no more social distancing in those situations,” he added.

The city reported 128 new cases over the weekend, among the highest so far. 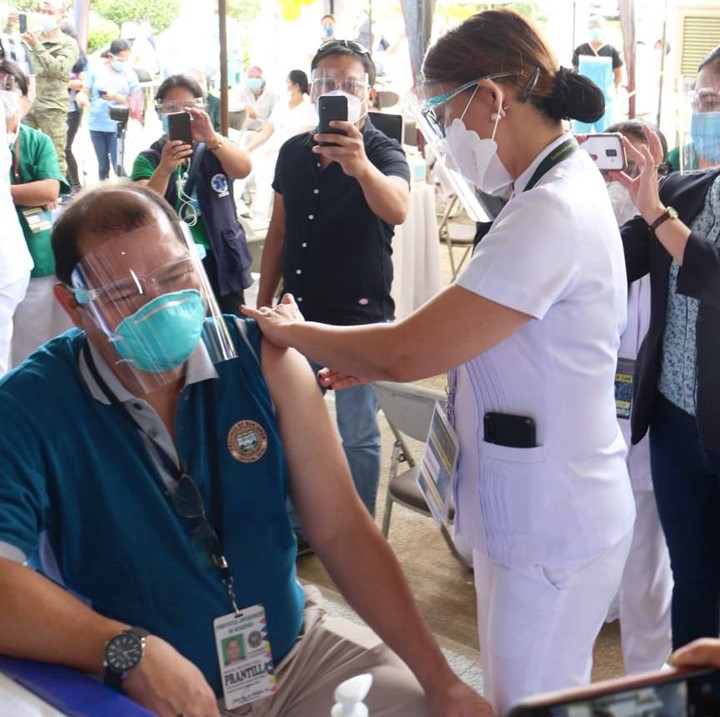 “As medical doctors, it is important that we not only understand this commitment but also reassure the public that these COVID-19 vaccines will prove widespread immunity. We are getting it first to show that there is really nothing to fear,” Prantilla said on March 8 during the first day of its 3-day actual vaccination.

Governor Jose Ma. Zubiri, Jr., in a statement, said Dr. Prantilla’s supportive gesture of volunteering to be inoculated in public sets as an example to more than 500 healthcare workers who were scheduled to get the vaccines.

“We have seen surveys reporting that significant percentages of the public were reluctant to take the available vaccines. We hope that this act of our BPMC chief will encourage us to be vaccinated so that we can establish the so-called herd immunity,” the governor said.

Provincial Health Officer Dr. Gary Guido Tabios, meanwhile, reported that BPMC had targeted 218 front liners to be inoculated on the first day (March 8), but only 202 got their first shots because records showed there were 13 deferrals and three swift rejections.

Tabios added that only one of BPMC’s 202 vaccinated front-liners had encountered AEAIE (Adverse Event After Immunization Experience). “The AEAIE that appeared in the form of rashes alleviated quickly after taking anti-histamine,” he said.

The PHO chief reported that the Department of Health in Region 10 (DOH-10) delivered 530 doses of Sinovac COVID-19 vaccines to Bukidnon for the BPMC’s 530 front liners.

He also confirmed that in the next few months, Bukidnon will have 390,000 doses of Novavax vaccines for those who are on the government’s priority list, as affirmed by the Inter-Agency Task Force Against COVID-19.

Meanwhile, Mr. Hansel T. Echavez, supervising administrative officer of the Public Affairs Information and Assistance (PAIA) Division of the Office of the Governor as of 6:50 PM on March 9 said, they are waiting for the final report from BPMC about the actual number of health front-liners who received the first inoculation.